After last week’s visit, the team ruled that my follicles were still not big enough so they gave me some “liquid gold” shots of Gonal F which was to help my follicles grow. 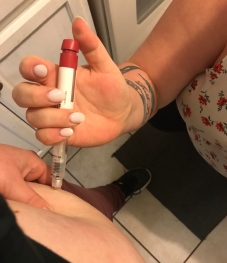 We switched to the shots from the pills because the pills you have to take for 5 days, and we didn’t know if that would be too much time for my follicles to become TOO large. The shots allowed me to come back after 4 days instead of 6. The shots were on Wednesday and Thursday night and it really wasn’t too bad! Sam’s becoming a pro! LOL. I had some nausea on Thursday morning (just in time for calculus class) but it only lasted a few hours and got better once I had something to eat.

This weekend we went to Birmingham to see Mumford in Sons in concert. It was honestly just really nice to get out of the house and go on a mini-vacation and really enjoy the nice weather. We went exploring and visited a few of our favorite places and drank delicious coffee.

I haven’t been stressing too much over all of this fertility stuff, mostly because all of my tests have come back normal and there’s nothing more I can do but simply wait it out. My biggest recommendation for anyone would be to keep yourself distracted so you don’t get to ask yourself the “what if”s. We both strongly believe that whatever happens, happens. We would much rather be going to concerts and living our best lives than worrying about what we can’t control.

*I DID take a few ovulation tests recommended by the nurse just to make sure my body wasn’t going to ovulate on its own. All 3 tests from over the weekend were negative, which is good.

We were back in the office Monday morning for another ultrasound. They measured my follicles again to see how they were growing. I have 2 on one side measuring at 11mm and two on the other side. One is measuring at 14mm and 17.5mm. The minimum they want is 18mm and they would like me around 21mm before they trigger my ovulation. After about 14mm they begin to grow at a rate of 2mm/day roughly. That would estimate the two 11mm at 15-16mm, the 14mm at 18, and the 17.5 at 21-22 before the trigger shot. Sooooo our chances of multiples are for sureeeee up there! But we will be happy with whatever number the universe gives us! All we need is at least ONE to take!

We have a plan of action.

Wednesday night around 10pm(Day 17), Samantha will give me another shot – this time the shot is called Ovidrel which will trigger ovulation, which is when the mature follicles release the eggs. Click HERE for an animation explaining it a bit better. My body will then release the egg within 24-36 hours. After that, the egg will be viable for 12-24 hours. (everything is sooooo TIME sensitive). We had the sperm shipped overnight to be there by Thursday so that when we go in Friday Morning (early) for the actual IUI procedure the sperm will be thawed and ready to swim their final marathon!!! So Friday is when the actual insemination will happen. After that is the 2WW (two-week wait) followed by a pregnancy test on day 16, which is April 14th! (we can’t test any earlier than that because we could end up with a false positive and that would just be disheartening) and WHEN (putting positivity into the universe) that test is positive we go in for a blood test to confirm!

I probably won’t write another update blog unless I start feeling any weird symptoms,  so I’ll see you in about 2 weeks!!