We went in Sunday morning at 10:30am to get inseminated. (Exhibit A)

We were called right back which was amazing. Everything went smoothly and the sample they looked at had RAPID motility and like 34 million sperm, which is fantastic! Plus it was a full hunters moon the night after our insemination so hopefully, we’ll get a little extra baby energy. 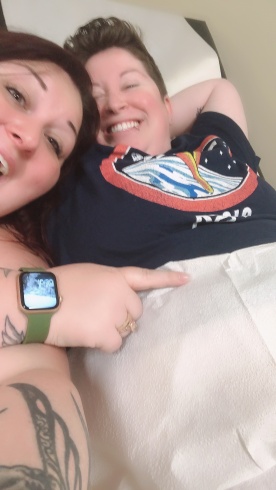 Fast forward to Sunday night. I had been feeling super nauseous all day and it pretty much felt like a bout of food poisoning throughout the day (with slightly more control). We finally got into bed and I felt something weird so I asked Sam to hand me some Tums to help my stomach. Not 10 seconds after I asked her, I was RUNNING to the bathroom (thank goodness our dog Hailey moved out of my way fast enough) where I spent the next 12 minutes throwing up. To be fair, I felt much better after that was all over. We called the doctor (because we googled stuff and got nervous) and they said that I’m totally fine and it’s just a side effect of the trigger shot. The next morning I got some ginger ale and more Tums.. just in case. The nausea is a little better but still present at this point and this was only 3 days post trigger shot. It can take 7-10 days to exit your system, so hopefully, the side effects go away.

One of the main differences between our other IUI attempts was that with this cycle, they prescribed me progesterone “insertables” for me to start taking 2 days after insemination.

I’ve still been feeling nausea off and on. It’s worse in the afternoons. I’ve been starving, which I’m not sure is a side effect from the progesterone.. I’ve been eating Tums to help at night and also drinking ginger ale during the day.

Tomorrow is the date that I am supposed to get my period according to one of the tracking apps I use. The other one says Saturday, so this is pretty much the worst time of the whole 2 week wait. I’ve been feeling some cramps, but at this point that could mean anything. Each day sans period is a good day so we are just taking it day by day. But there’s also this: